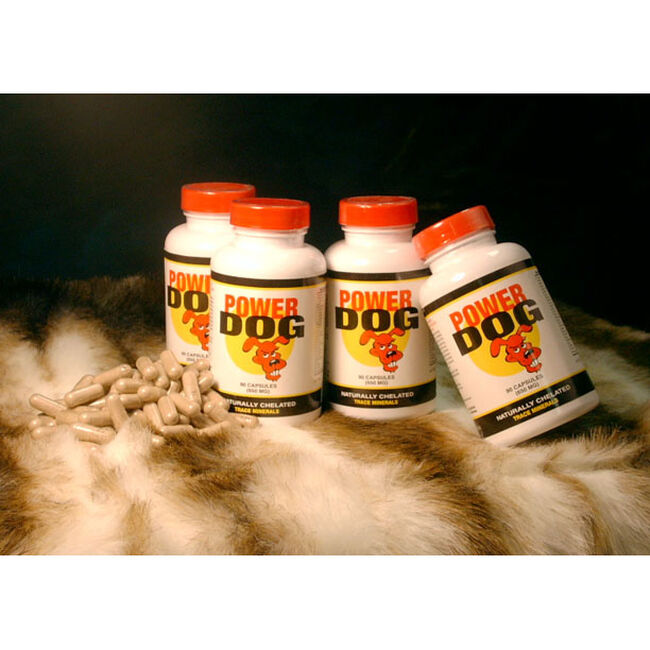 $11.97
The link to Power Dog Capsules has been copied
Details

Trace Mineral definition:
Trace Minerals are those minerals that are found in very small quantities or traces.

They play a very important roll in health, since even with very tiny amounts of them, the health could be powerfully affected. They are essential in the assimilation and utilization of vitamins and other nutrients.
They aid in the digestive process and function as catalyzers of many hormones, enzymes and other essential bodily functions and reactions.  They also help replenish the electrolytes lost in perspiration or
due to intense diarrhea.  They protect the body against toxic reactions and poisoning by
heavy metals.

The origin of POWER DOG Trace Minerals is a fossil rock from an ancient seabed, with a natural composition of salts and oligoelements from algae, fish, plankton and plants, which were fossilized through millions of years, forming this rock that today is pulverized and fragmented for packaging.

The composition of these minerals is a silicate salt that contains tiny amounts of diluted gases, heavy metals and oligoelements in a chelated form, balanced in such way so as to conform a neutral
salt. Thus mediating in the inflammatory processes, regulating it's acidity.

Particularly POWER DOG Trace Minerals, have the characteristic of being anti-inflammatory, whether orally or applying them over the skin.

They aid in the digestive process in such a way, so as to increase the assimilation of some substances that usually are not digested, such as fiber; giving a maximum use to the nutrients.

They promote the growth of nails, hair and skin, increasing their color and retarding premature aging and white hairs.

They increase fertility and improve the testicular and ovarian function.

They improve the function of joints and bones, especially in those dogs that are showing arthritis at old age, prolonging their life span.

They improve the assimilation of any drug therapy, increasing it's absorption.

They also provide with an invaluable source of electrolytes, which replace the salt loss due to perspiration and breathing, especially during the months of summer.

Finally they have a powerful antioxidant effect, which improves the general function of all cells, retarding their aging. This antioxidant effect also gives the minerals a characteristic ability, which protects the body from certain poisons and toxins, which normally would deteriorate the condition of many cells, gradually sickening the animal. An example of this is the insecticides, pesticides, the household cleaners and other chemicals that the dogs absorb through simple contact with the ground where they live.

NOTE:
These TRACE MINERALS are not like the other Pre-Mixes that contain 10 or 20 minerals available separately in the market. Just the fact that it contains diluted gases and chelated heavy metals such as Barium, Cadmium, Strontium, Radium and many others, demonstrates that it is not a Pre-Mix, since these heavy metals are not available over the counter to be incorporated in a pure form to any formula. The Minerals contained in POWER DOG are naturally occurring, where they have been balanced naturally in this formula, after a slow process of fossilization of algae and marine animals.
Therefore, there is NO OTHER product in the market that has the same characteristics.